The Duke – Life and Times of Duke Carl Eduard of Saxe-Coburg and Gotha, Duke of Albany 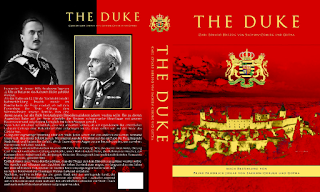 This book*, to be published on my 75th birthday, is to celebrate a jubilee. I dedicate it to my father, Prince Friedrich Josias, who wrote it. On 29 November 2018, it will be the centennial of his birth. I also dedicate this book to my grandfather, who as the last duke who ruled the duchies of Saxe-Coburg and Gotha was overthrown 100 years ago by the November Revolution. In fact, my grandfather lost his throne just weeks before the birth of his last child, my father.

About my grandfather’s life and my thoughts on it, I expressed my verbal and critical views in my own book of memoirs, "I did it my way." Our family has provided historical research with all relevant sources, particularly as I desire every aspect to be open and clear. Now, it seems that the time has come to publish this book, which my father worked on for years, and which he did not want published in 1984, on the occasion of his father's 100th birthday.

In fact, at a time when the lives of entire nations are once again threatened by mass hysteria and emotional blackouts, it may help to keep a handle on reality. As we have painfully discovered, it is of extreme importance not to cloud the mind through simple ideologies.

Andreas, Prince of Saxe-Coburg and Gotha

(*) THE DUKE – LIFE AND TIMES OF DAUKE CARL EDUARD OF SAXE-COBURG AND GOTHA, DUKE OF ALBANY (by the late Prince Friedrich Josias of Saxe-Coburg and Gotha) will be published by EUROHISTORY in March 2018 in time to celebrate Prince Andreas' 75th birthday! 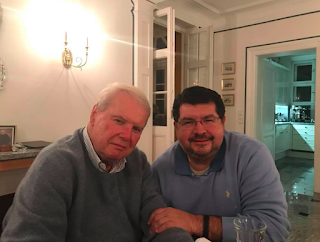 HH The Prince of Saxe-Coburg and Gotha and Arturo Beéche 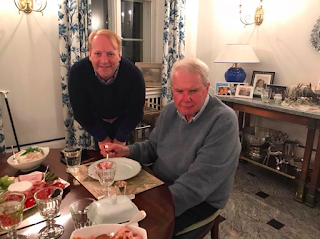 HH Prince Andreas of Saxe-Coburg and Gotha and Dave Higdon

Greetings from Coburg, where I my husband and I are spending a few days with my friend Prince Andreas of Saxe-Coburg and Gotha and his family.

We arrived here last night from London, where we spent fun days with friends and business partners.

In fact, while there I heard, with surprise, that a former assistant has taken to telling people that EUROHISTORY is coming to an end!

Lord Sweet Jesus what a shock ... I had no idea I was quitting my passion!

So, for the record, EUROHISTORY is not coming to an end now, tomorrow or in the foreseeable future. Against all odds and machinations by several envy-filled pseudo historians, today we are stronger than we have ever been!

Subscribership to our magazine is solid, and growing. The magazine runs on a budget and has no debt.

Furthermore, our book publishing business is thriving. We have published 28 books since 2001. There are several books in various stages of production at the moment. We just commissioned another book (The Royal House of Sweden). Furthermore, Prince Andreas surprised me this morning with a manuscript that we will publish in English and German versions. Kensington House Books, much to my absolute delight, has no debt.

This year we provided research/editing services to several authors. We also served as consultants in four television programs. Hardly the sort of stuff that someone who is about to "call it quits" does, don't you think?

At present, we are working on the following projects:

3. The Death of a Romanov Prince: Oleg Konstantinovich: In production and layout

4. The Royal House of Bavaria: in the last stages of editing/writing.

5. The Grand Ducal House of Hesse and by Rhine: in the last stages of editing/writing.

7. The Royal House of Savoy: in the last stages of editing/writing.

9. The Last Duke: The Life and Times of Duke Carl Eduard of Saxe-Coburg and Gotha, Duke of Albany: began translation this morning.

Ah, as if this was not enough, we are also nearly finished with the list of speakers for our upcoming Fourth Royal Gatherings in London (7-8 April 2018). More information will be released on this very soon!

As you can all see, in spite of nearly having lost our son this summer, and while enjoying the absolute joy of becoming a grandfather and returning to academia ... I keep busy, really busy!

With these thoughts I leave you now ... as I go back into the winter garden and enjoy a well-deserved martini with a dear friend of more than 25 years' standing ...

Enjoy, and know, that I am here to stay!

Posted by Eurohistory at 7:13 AM No comments: 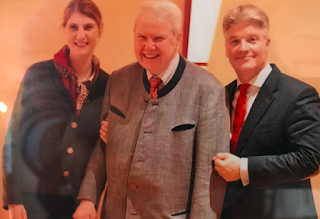 Prince Andreas of Saxe-Coburg and Gotha has informed us that the civil wedding of his daughter, Princess Stephanie, to Mr. Jan Stahl will be in Gotha on 5 July 2018.

The religious wedding ceremony will be celebrated on 7 July at St. Moritz Kirche in Coburg.

I am delighted to share this with you all. Hopefully, the summer wedding will be a fantastic gathering and I can report further after my return!

Posted by Eurohistory at 5:12 AM No comments:

The 2018 Royal Gatherings London Conference will take place on 7th & 8th April at:

We already have the following speakers confirmed: Deborah Cadbury, Edward Hanson, Coryne Hall, Susan Symons & Jackie Lees.
Further emails will be sent out in due course as we confirm other speakers.

Please can you put these dates in your diary & we hope that you can attend next April. 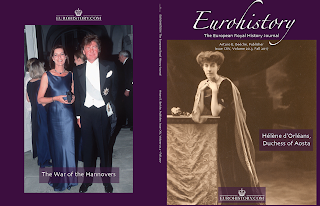 We have been in a frenzy of work here at EUROHISTORY!

While Issue CXIV is printing and close to being shipped to us, we have been putting the finishing touches on Issue CXV – Fall 2017. Inside this latest issue of EUROHISTORY, readers will find the following excellent articles and sections:

1.  Ernst August vs. Ernst August – The War of the Hannovers
by Marlene A. Eilers Koenig
2. Hélène d’Orléans, Duchess of Aosta – Hopeful Expectations
by Ed Hanson

3. Who Is in the Photograph: A Summer in Palma
by Ilana D.  Miller
3. Princess Lucia of Bourbon-Two Sicilies: Life and Legacy of the Last Duchess of Genoa, A Little-known Artist
by Seth B. Leonard
4. Berlin Stadtschloß & Colditz – Two very different German Schloßer
by Katrina Warne
5. Book Review – Royal Wills
by Katrina Warne
6. Book Reviews
by Corynne Hall
7. Royal News


We expect to send Issue CXV – Volume 20.3, Fall 2017 to print in two weeks and will start mailing around the end of November, if not earlier!

We are gearing up to meet in the Hague for our annual Fall Eurohistory Gathering. We have some seats left and we would like you to consider attending this year's conference, which is hosting an excellent roster of royal authors!

If interested in joining EUROHISTORY's ever-growing pool of subscribers, you can do so by emailing us at: aebeeche@mac.com or eurohistory@comcast.net

Or by sending your subscription payable to:

UK Subscribers have the option of paying in Sterling by sending a cheque payable to Ms Katrina Warne:

Posted by Eurohistory at 8:29 AM No comments:

Royal Gatherings in The Hague IV

It is with great pleasure that EUROHISTORY, in cooperation with HOOGSTRATEN ENGLISH BOOKSTORE, announces the list of speakers who will be regaling us with an amazing array of royal lectures at this year's gathering in The Hague's elegant Park Hotel!

10. Arturo E. Beéche: The Abduction and Execution of the Duke d'Engien

Space is limited...Hence, if you wish to join us please do not delay or hesitate. To reserve a seat contact us at: annet.bakker@hoogstraten.nl and/or aebeeche@mac.com

We have reserved a set of rooms for those wishing to spend the weekend at the hotel. To obtain one of these rooms, please contact: aebeeche@mac.com for instructions.

Posted by Eurohistory at 11:04 AM No comments:

It has been some time since I had the peace of mind necessary to refocus on Eurohistory work!

However, after overcoming several family crises that affected us beginning in May, I am now able to get to work on several book projects that are nearly finished, as well as on EUROHISTORY'S Summer 2017 Issue, which is about 6 weeks late. In fact, I also started piecing together our Fall 2017 Issue, Volume 20.3.

Honestly, I feel relieved to have been able to send to print the Summer 2017 Issue. I also am enjoying very much putting the Fall 2017 Issue together and look forward to sending it to print in the next couple of weeks!

Furthermore, I have resumed doing layout on several book projects that we have had pending since the early summer. Our next books will be:

1. Death of a Romanov Prince: Oleg Konstantinovich of Russia, by Terence Boland.

2. The Grand Ducal House of Hesse and by Rhine, by Ilana D. Miller and Arturo E. Beéche.

3. The Royal House of Bavaria, by Coryne Hall and Arturo E. Beéche.

4. The Royal House of Savoy, by Kassandra Pollock.

5. Imperial Abyss – The Romanovs in February 1917, by Greg King and Penny Wilson.


Inside Issue CXIV – Summer 2017, subscribers will find the following articles:


1. The Burial Places of the Later Bourbons of France,
by Ove Mogensen

4. St. Petersburg – A City That Never Disappoints,
by Katrina Warne

If you forgot to renew your 2017 subscription, you can still do so – simply contact us at: aebeeche@ mac.com or eurohistory@comcast.net

Our website's email is currently not working pending some work that the web manager is completing! 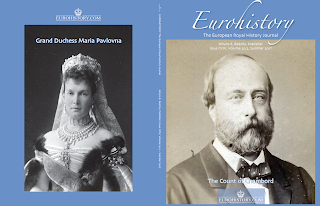